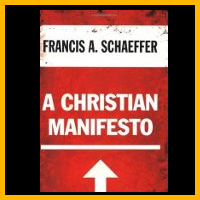 ...speaking of civil disobedience is frightening...That is, with the prevalence of Marxist thinking--and especially with the attempted synthesis of Marxism and Christianity in certain forms...what we are saying could become a Marxist and terrorist tool to bring anarchy. Or in a similar vein, it could become a tool to impose by force the humanist world view resulting in the loss of humanness and in some form of authoritarianism.

More information on A Christian Manifesto