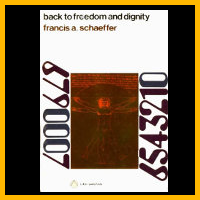 "Twice Skinner specifically attacked C. S. Lewis. Why? Because he is a Christian and writes in the tradition of the literatures of freedom and dignity. You will notice that he does not attack the evangelical church, probably because he doesn't think it's a threat to him. Unhappily, he is largely right about this. Many of us are too sleepy to be a threat in the battle of tomorrow. But he understands that a man like C. S. Lewis, who writes literature which stirs men, is indeed a threat."

More information on Back To Freedom And Dignity