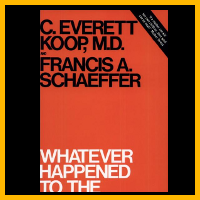 "...we cannot understand idealistic Marxism except as a Christian heresy. Neither the East with its conception of man nor Islam could have produced idealistic communism. Communism has not won its converts by what Stalin did (though I think what he did is a natural outcome to the whole system), but rather by the idealistic promises that were made that it would enhance the dignity of man. Materialism never had a base for this, but it did have a memory of Christianity to build on."

~ Dr. Francis Schaeffer, Whatever Happened to the Human Race? ~ Editor's Note: In our current cultural climate, we are aware of the sensitivity of these sort of words. We at Francis Schaeffer Studies believe that Dr. Schaeffer would both encourage compassion to individuals (as this was part of his ministry) as well as object to destructive philosophies that would seek to tear down American society, such as cultural Marxism. Both are evidenced in his writings.

More information on Whatever Happened To The Human Race?